Dr. Patricia Gordon has worked tirelessly to treat women in impoverished countries with cervical cancer using the MedGyn Cryotherapy System. She has set up “see and treat” clinics around the world using MedGyn’s Cryotherapy.

Dr. Victoria Mui is shown in video treating women with cervical cancer in Uganda with the MedGyn Cryotherapy System. Through the efforts of Bulamu Healthcare, MedGyn’s Cryotherapy was accessible to women in need in Uganda. 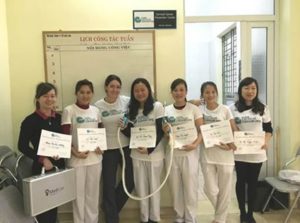 New “see and treat” centers were opened by Cure Cervical Cancer (CCC) in Vietnam. 15 medical professionals were trained on the MedGyn Cryotherapy System and over 2,500 women were treated! MedGyn is proud to be working with CCC to treat cervical cancer worldwide.

Dr. Maggie Carpenter and team established cervical cancer programs in Ethiopia which screened and treated over 1,000 women using the MedGyn Cryotherapy System. MedGyn is honored to work with Go Doc Go and other NGOs to promote women’s health worldwide. 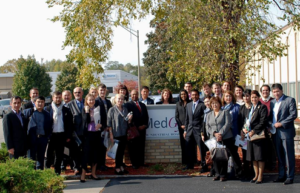 U.S. Department of Commerce healthcare delegates from CIS countries visited MedGyn headquarters to learn about the product line in women’s health. Delegates included physicians, hospital administrators, and distributors all of whom have a significant impact in bringing innovative medical devices to their countries. Medgyn was honored to host the delegates to improve women’s health in their region. 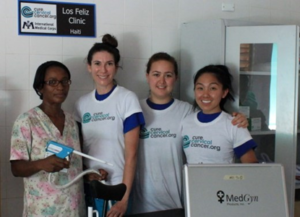 11 new “see and treat” centers were opened by Cure Cervical Cancer (CCC) in Haiti. 22 medical professionals were trained on the MedGyn Cryotherapy System. Haiti is noted as having the highest number of reported cases of cervical cancer in the world. Medgyn was honored to be part of the CCC missions in improving women’s healthcare worldwide. 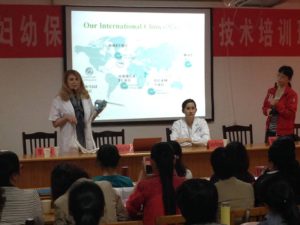 MedGyn partnered with CureCervicalCancer on a mission to certify 45 Chinese gynecologists in MedGyn Cryotherapy and screen and treat nearly 300 patients for precancerous cervical lesions. The team visited and lectured physicians in Guangzhou, Kunming, Hekou, Shiping, and Lianyungang, China. MedGyn was honored to be part of the mission with CCC Founding Director Dr. Patricia Gordon and Medical Director Dr. Jennifer Lang.

Same technology as the Endosampler , only better! Our new Endosampler II™ is designed with two suction holes at tip for larger sampling size of tissue and reduce the force of suction for better comfort.

This device is designed to collect clearly-differentiated endometrial tissue without anesthesia, in an outpatient setting or as an office procedure. This device improves efficiency, convenience and reliability of the endometrial tissue collection and to reduce the physical discomfort of the patient. It provides liberal histologic specimens, surgical ease and is procedurally cost-effective for routine use. MedGyn’s Endosampler II™ is recommended for both pre- and post-menopausal women for diagnostic purposes.

The Lily Project, a nonprofit based in Nicaragua that is working to reduce the rate of cervical cancer in rural communities has now partnered with MedGyn to use the Cryotherapy System for treatment. The project is modeled after successful programs in other low resource areas that are using the single visit approach with VIA + Cryotherapy. MedGyn is honored to work with this organization. 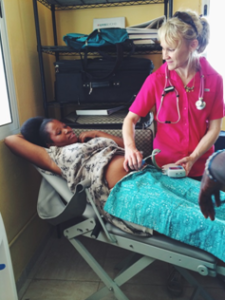 Thomazeau, Haiti, a town with limited healthcare, was provided MedGyn’s dopplers by Dr. Whitney Mascorro of Hendrick Health, who wanted to train local aids and provide better prenatal doppler testing. And now, thanks to our MedGyn Doppler, hundreds of women were tested and were gifted with the sound of their child’s heartbeat. “MedGyn Products has been providing prenatal dopplers to the international Obstetrics community for over twenty years. The company is committed to reducing fetal demise and morbidity with its high quality obstetrics products that have become the international standard for Obstetricians the world over. ” 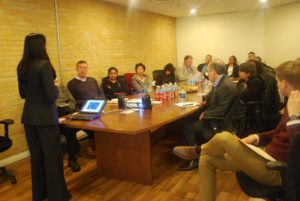 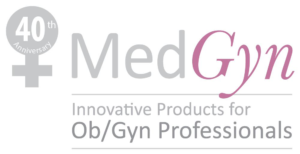 MedGyn Products proudly celebrates 40 years! In 1975, MedGyn launched the AL- 102 binocular colposcope, a necessary equipment used by OB/GYNs to examine the cervix. Since then, MedGyn added four binocular colposcopes in its line and in 2003 launched its first digital colposcope, the AL-106 and most recently the AL-106 HD Digital Video Colposcope. MedGyn’s specialty in Gynecology Oncology increasingly grew with its addition of the Cryotherapy System. The product is used around the world particularly in underdeveloped countries to treat cervical cancer. The product is used by leading physicians and was also reviewed by the World Health Organization. Currently MedGyn partners with leadings NGOs to deliver improved healthcare with the use of the Cryotherapy System.

This year MedGyn celebrates its 40th anniversary and manufactures and distributes over 1,000 products in therapies including Gynecology Oncology, Obstetrics, Infertility, and Urogynecology. MedGyn exports to 100 countries and was also the recipient of the State of Illinois Exporter of the Year Award in 2014. Our future success is to continue developing innovative high quality products to improve women’s healthcare worldwide!

We offer a full range of high-quality obstetric and gynecology products including equipment, disposables and instruments to meet the needs of healthcare professionals worldwide